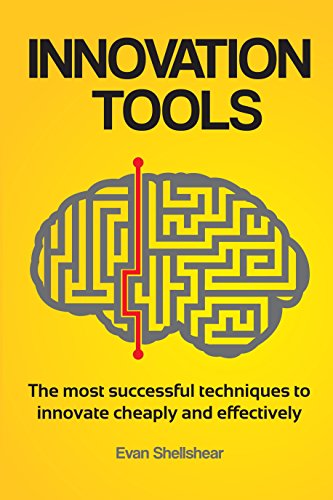 Few great innovations arrive with a thunderclap; they are almost always the result of many small successes. Since innovations are delivered through projects, it’s important for project managers to be aware of how innovations are coming about.  Evan Shellshear’s new book, “Innovation Tools: The most successful techniques to innovate cheaply and effectively” tells us how it’s being done in the 21st century. It’s about increasingly powerful and cost-free tools and venues being available to the would-be entrepreneur, severing their dependence on corporate or government-sponsored skunk works and laboratories.  Unless, of course, you happen to work for such an entity, in which case, then what?

I’m not going to summarize the book here: if you check it out on Amazon you’ll find it has a pretty complete table of contents that tells you where it is going.  One thing I will tell you is that it is not a recipe for how to have innovative ideas: that you have to do for yourself. But if you do have an idea, then consult this book to learn about the technical tools and business avenues that are now available to every entrepreneur seeking to launch what could be the next big thing.

All these new modern tools are in essence designed to bypass the traditional modes of organizational permission to do something.  They also advocate going far beyond your current organizational space to get things done, whether by crowd-funding, crowd-sourcing, or open-sourcing. Such approaches certainly turn conventional project management, with its assumptions of control and predictability, on its head.

Since I’m not really in the physical products market, I found the descriptions to be most interesting, but for my purposes the most appreciated chapter is the one in which he describes how decisions on innovation are inevitably non-rational, because it mirrors the thinking behind my own recent book (Let It Simmer) on why governance practices are so hard to launch in organizations.

Evan provides the academic citations that explain why The Simmer System works, particularly the work of Gerd Gigerenzer (“Risky Savvy“) who has documented that rules of thumb, while technically inaccurate, often yield better results than detailed analysis or expert opinions.  In any case, analysis requires data, and many process-immature organizations just don’t have good stores of reliable data to work from.  While striving towards best practices in the long run, it usually happens that we need something to tide us over until the long run gets here.

I’d also add to the work of the academics by suggesting that a lot of analyses are further misled by an unreasoning assumption of the existence of a normal curve.  I don’t believe they do occur in nature nearly as often as theorists suggest, and it gets abused just because it makes the mathematics so easy.  Easy short-cuts don’t necessarily lead to accurate predictions.

Another reason we need something like the Simmer System, which advocates piling up a lot of small wins that people can accept, is the situation of “cognitive dissonance”, which mean the stress caused by recognizing the impossibility that both of two contradictory beliefs can be correct and yet being unable pragmatically to renounce either of the beliefs.  People “resolve” this on  a day-to-day basis by pretending that this contradiction does not exist.  My observation on this subject is that, while professing these beliefs openly, sub-consciously people know that this discrepancy does exist, that at least one of the tenets is wrong, and it bothers them greatly to have to continue to dissimulate.  Hence there is a lot of defensive behavior aimed at concealing what everybody already knows, and this is at the core of the resistance that most PMOs encounter.

In the project and program management area, other than the few people writing about “anti-maturity”, nobody has really defined the conditions that must exist for those practices to be successful. They are just assumed to be true.  The thing is, in an organization that is just trying to get started with these disciplines, it’s pretty much a matter of definition that those conditions do not exist, otherwise this effort wouldn’t be needed. Cognitive dissonance at work.

The Simmer System is all about getting organizations to do something they say they want to do even though their every action indicates that they really don’t.  If you asked any individual manager whether it is OK to have the large majority of all their activities be late, over budget, incompetently completed, or some combination thereof, they would say “certainly not”.  Yet their own activities are just that.

So what do we do about all this?  In Shellshear’s world, you simply go around the obstacle.  If the corporation or agency doesn’t get innovation, go to the stakeholders.  In the Internet era, that’s fairly easy to do … if you work for yourself.  If you’re in an organization, it’s not quite so simple.  Your upper echelons won’t appreciate you going around them in a direct play to the stakeholders.  You have a couple of choices:

a. Try positive messaging.  One of Shellshear’s observations has made it into a more institutional setting: the work pioneered by David Halpern in the UK (now copied in NGOS and other govts), setting up “Behavioral Insights Teams”, better known as “nudge units,” to tweak messages to decision-makers and mass messages to taxpayers to remind them of everyone ELSE’s compliance levels.  On a much narrower scale, you can publicize the positive messages: help your peers see the successes that someone else is having. Of course, that does mean that you have to find those examples. Early in your approach to setting up a PMO, those examples may be a bit hard to find. They don’t have to be complete slam dunks, just show how things are a bit better.

b. Try the Simmer System, which suggests that there are many opportunities to cooperate with peer managers in a way that moves the objectives of your PMO forward.  Offering to help always works better than trying to tell someone what to do, especially if they don’t recognize your legitimacy.

Or, of course, you could do both.

SPECIAL OFFER: If you’re interested in writing a review of Let It Simmer, please contact me at dbrown@decisionintegration.com and I’ll be happy to send you a copy to review.